Last week, Youth organization Status M participated in the second European Convention on working with young people (European Youth Work Convention 2015), the largest event related to work with young people in Europe. The Convention was held from 27 to 30 April 2015 in the Belgian capital. The Convention was attended by over 500 people from all over Europe, Canada and South Africa, among whom were journalists, youth workers, people from state institutions, researchers; all gathered with a common goal through cooperation to improvement of the youth work. 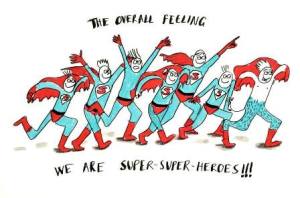 Since 2010, when the the first European Convention was held until today, there have been certain changes in the field of youth work concerning practical activities and youth policies. Young people are increasingly threatened by unemployment, but also changes in the policies threaten the funding of youth work in some parts of Europe. At the same time, these changes have enabled the development of new (non-formal) approach to working with young people. The aim of the Convention was to make an overview of the organization, events, projects and methods related to the work with young people in Europe, and formulate a joint document that will influence the further adoption of policies – European Youth Work Declaration – Making a World of Difference.

Participants have been involved in a variety of organized workshops through which we could contribute to the creation of the declaration or to learn about with other methodologies. The workshops were divided into 4 categories: “In  the spotlight” – the impact of youth work for youth, “Towards common ground” – the workshop that dealt with the major issues of the Convention, “Food for thought” – motivational talks by various experts in youth work and “Under the lens “- workshops of various associations in Europe.

They organized several study visits to local NGOs called “Under the hood” for us, through which we are acquainted with the specifics of youth work in Belgium.

Status M as part of a workshop called “Under the lens” together with two organizations from Germany and one from Slovakia, presented our longtime work and achievements of organization and our partners in the project “Young Men Initiative” and “Be a man, change the world” as well as plans for future activities. Representative from Status M had a 20-minute format TED talk to present our work and the topic of working with young men gained great attention on the Convention! The presentation can be viewed at this link.

Be sure to see this video for a look from inside but also to see what did a member of our team considered the most important achievement of the Convention!

We are pleased to have been part of the Convention, and we thank Ministry of Social Policy and Youth, CARE International, OAK Fundation and Agency for Mobility and EU Programmes for their support!

Manage Cookie Consent
To provide the best experiences, we use technologies like cookies to store and/or access device information. Consenting to these technologies will allow us to process data such as browsing behavior or unique IDs on this site. Not consenting or withdrawing consent, may adversely affect certain features and functions.
Manage options Manage services Manage vendors Read more about these purposes
View preferences
{title} {title} {title}